So, I got tired by having the crap spammed out of my inbox by CocoaBurn… 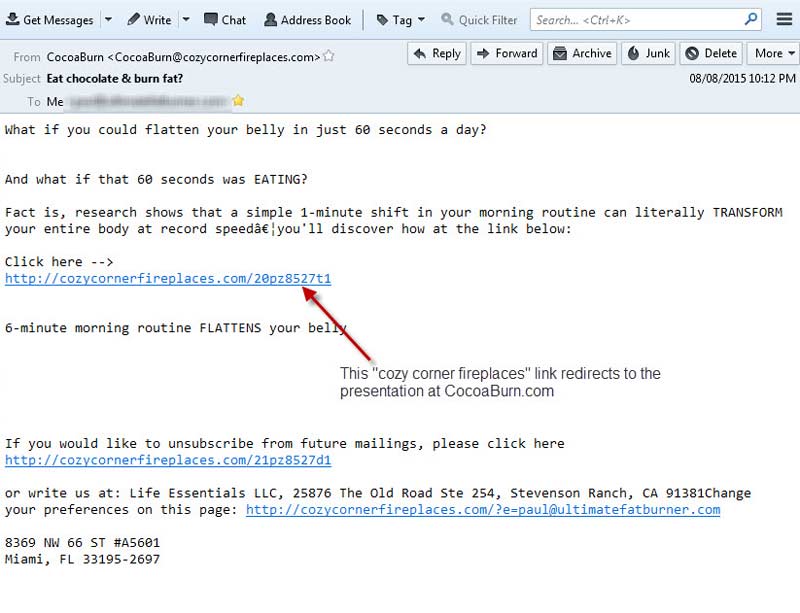 I received these daily for ages!

… so I thought I’d give in and take a look at the product.

You know, to do a CocoaBurn review.

I shudda just hit the “delete” button one more time.

In a hurry? Here’s the “Quick and Dirty” on the Cocoa Thermogenic fat Burner Review (click each point for more details):

Completing this CocoaBurn review was a pretty tiresome affair.

Yeah, this is how I felt. YOU try watching it!

Not only did I have to sit and grit my teeth through a tedious 20-something minute video sales letter to finally get a look at the product, but the presentation itself was a tangled web of of unsubstantiated claims, half-truths, outright nonsense, and a somewhat relevant discussion on the dangers of elevated insulin levels.

And to top it all off, CocoaBurn is allegedly endorsed by a “world-renown” doctor, Dr. Steve Klayman (I didn’t see anything on his web site about CocoaBurn so who knows?).

Ok, so he’s not actually a medical doctor as implied (he’s a chiropractor), he doesn’t appear to specialize in weight loss, and from I can tell he’s relatively unknown outside of Austin, Texas, where he operates, but who cares?

When you’re piling it this “high” and this “deep”, “world renown” is a small detail at best.

Anyhow, where was I?

Oh yeah, the ridiculous claims. Hmmmm… where to start? After all, there’s so many. How about…

Let’s Take a Closer Look at the CocoaBurn Product Claims

Not one of them is supported by a single clinical reference.

In other words, the retailers don’t reveal which studies support the statements they make. I personally, don’t know of any that would justify claims of this nature… especially given the relatively ordinary nature of the product formula.

And, since they’re the ones making the claims, the burden of proof rests with them, not me.

Some statements, like chromium’s effect on increasing muscle mass is completely contradicted by the existing clinical evidence – it does nothing of the sort.

This has been confirmed in multiple studies.

And as far as chromium’s effect on weight loss?

“…our meta-analysis suggests a relatively small effect of chromium picolinate compared with placebo for reducing body weight. The clinical relevance of the effect is debatable and the lack of robustness means that the result has to be interpreted with caution.”

In “non-politically correct” speak, the studies showed a small effect, but they appeared to have methodological flaws which called the authenticity of the results into questions.

One other study, performed using the variation of chromium included in CocoaBurn (chromium polynicotinate), showed more promising results, however…

So much for “sparking your metabolism” and “burning fat.”

At this point, you’d be correct in assuming things are starting to get pretty gosh-darned silly.

But I’ve found that 99 times out of 100, if a series of seamingly ridiculous statments are made about a product, there’s usually a germ of truth lurking in the background.

Theobromine (a constituent of cocoa which is included in CocoaBurn) can lower blood pressure by dilating blood vessels.

This has been demonstrated in human clinical studies.

Of course, CocoaBurn won’t reduce your blood pressure regardless of the retailers say, because it doesn’t contain anywhere near the dosage of theobromine necessary to elicit results similar to those obtained in the study.

Same goes for the “asthma benefit”.

Theobromine can relax bronchi muscles in the lungs, which suggests it may have an anti-asthmatic effect. At this point, however, this benefit has only been demonstrated in animal studies, may or may not be applicable to humans, and certainly not at the dosage included here.

After enduring the 20-something minute video of near-continuous bullsh*t, I learned that CocoaBurn contains chromium, green tea, cocoa powder and brown seaweed, but I had to go digging for the dosage information, because that wasn’t provided anywhere.

Ok, now that you know what’s in it…

Let me first say this…

The CocoaBurn formula is not without value.

Chromium polynicotinate is probably the best version of chromium to experiment with right now, and it can be effective for eliminating cravings.

Weight loss however, not so much.

Properly standardized green tea can be helpful too, although it would be more so if it were combined with caffeine, as it was in this positive clinical study.

Having said that, CocoaBurn gets a 1 star rating from me for a couple of reasons…

Like it or not, the burden of proof is on the retailers – the makers of CocoaBurn.

And they haven’t provided any.

YOU should respond by not handing them your money.