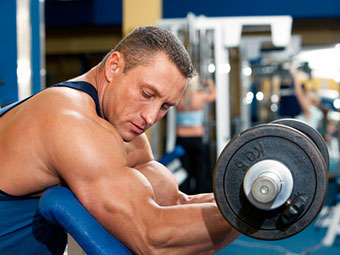 In fact, at the time of this writing C4 is the second best selling product on all of Bodybuilding.com. Just for the record, that doesn’t mean it’s the most amazing thing under the sun or anything; most pre-workout supplements tend to sell well and receive high ratings from their users.

How Do Users Rank C4 Extreme?

For example, Bodybuilding.com users rank C4 8.5 on a scale of 10. They also rank…

So yeah… like I said, these products are well received and generally well-liked.

Unfortunately, the reason they are enjoyed so much is not because they are chock-full of ground-breaking, cutting edge muscle building ingredients, but because they get you jacked like hell and provide an awesome pump. If you’re serious about your workouts, the energy element of these supplements is a real bonus, although in reality you could create your own energy stack with a couple of simple ingredients for a lot less money.

How does Cellucor’s pre-workout offering measure up?

In addition to a smattering of B and C vitamins, this pre-workout supplement contains the big three:

Of course, this product would not be a true pre-workout supplement without an energy blend. It contains hearty dose of caffeine (150 mg) and indiscriminate and likely under-dosed amounts of L – tyrosine, bitter orange, and some B vitamins – all pretty much standard “energy fare” for a product of this type.

In the time between finishing this review and publishing it, Cellucor revised the “Explosive Energy Blend” slightly, dropping the bitter orange and extra B’s, and adding an undetermined amount of Velvet Bean (standardized for l-dopa, the precursor to the neurotransmitter dopamine) and something called TeaCor™, which appears to be a patented version of “theacrine.” Theacrine is an alkaloid similar to caffeine that occurs naturally in Chinese tea, Camellia sinensis. It appears to have anti-inflammatory and analgesic effects. You’ll be seeing more of Theacrine and its amazing energy-boosting effects in the coming months, I’d be willing to bet… despite the fact there are no human-based studies to validate them.

So where does that leave C4 Extreme?

The only problem with concentrated pre-workout formulas like this one, is that the serving size is too small to allow for optimal doses of the core ingredients. Of course, that problem extends to ANY “concentrated” pre-workout sup; not just this one. For instance…

One scoop contains 5.9 grams of ingredients (1 of which is carbohydrate and doesn’t count), which means there’s only room for slightly less than 5 grams of actual ingredient. Obviously, then, it’s impossible for this formula to contain an optimal 5 or 6 gram dose of beta alanine and have “room” for anything else.

On the other hand, a serving of BSN’s No-Xplode contains 18.5 grams (7 of which are carbohydrates), so there’s twice the “room” to include critical ingredients at proven doses (which BSN “blows” by including a “hodge-podge” of un-necessary ingredients to “dress up” the label, but that’s another story).

One way to get around the small dose size is to…

The problem with increasing your serving size is that…

So let’s get to the bottom line…

The problems that it faces with small ingredient dosages is one it shares with all other concentrated pre-workout supplements… it’s under-dosed.

That said, if you’re not looking for optimal dosages of ingredients like creatine, beta alanine, and arginine and just want to get jacked… I highly doubt you’ll be unhappy with this product. I haven’t tried this myself but I have a couple of buddies who really like it; apparently it tastes good, has no aftertaste, causes no bloating or no upset stomach, and offers good, clean energy. Best off, it’s affordably priced; $29.99 at BodyBuilding.com for the 30 serving tub.

If you’ve tried Cellucor’s C4, please do share your experiences with us and our readers in the comments below. And if you’ve tried both the old version and the new version with theacrine, please let us know how they compared, and which you preferred!