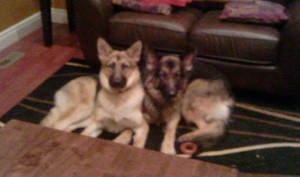 So it’s Saturday night, and my girlfriend’s out hanging with the girls, and my girls and I are chillin’ at home (that’s them over on the right; Sheba and Nika, my German Shepherds). So one thing leads to another and before I know it I’m over surfing on BodyBuilding.com, checking out what’s new and exciting.

And lo and behold, I didn’t have to look too long before I stumbled over a “gem” – it’s something new from USP Labs; a product called TT750.

Now TT750 is a tribulus product, and as you know, tribulus is a normally sold as a natural “test-booster”, despite the fact it does nothing to boost testosterone, as demonstrated in numerous clinical trials. (It may, however, may work as a libido booster).

But wait, intrepid reader, don’t leave just yet. See, this product is different. How? Well here’s how USP Labs puts it..

While they spend time focusing on extracting for Protodioscin, we’ve unlocked this gem…Tribulosin

We’ve managed to uncover a special constituent of Tribulus called Tribulosin… In fact, Tribulosin is so rare it’s only found in miniscule quantities in a few of the world’s Tribulus plants according to a study that measured this…

Does this mean anything to you?

It shouldn’t, because it’s nonsense. I’ve heard of “baffling them with BS”, but this takes the cake.

For instance, what does “uncovered” mean, exactly? That’s some serious weasel-wording, right there. Do they mean “discovered?’ It can’t be, because this constituent of tribulus has been known about for years. (Hell, tribulosin-products have even been pitched before!).

Nope. Not that I can find.

So what does it mean?

Your guess is as good as mine.

As far as I can tell, the incredible benefits of this new standardized version of tribulus are entirely based on USP’s customer feedback, and as we know, anecdotal data means very little. To be fair, positive feedback for tribulosin-based tribulus products is not restricted to USP’s product alone – I was able to find it for other such products as well without looking too hard. Genuine or not, it’s still anecdotal evidence.

So what is tribulosin good for?

Well, as far as I can tell, it has heart-protective effects for rats.

However – and this is important – these were not feeding studies (where the compound was given orally) – so there’s no data to support the oral bioavailability of tribulosin. In other words, taking it by mouth may do nothing at all.

What about the libido-boosting effects of tribulus?

The animal based studies verifying tribulus’ aphrodisiac effect were performed on rats using a “standardized for protodioscin” product.

But is it possible that tribulosin possesses similar characteristics?

It’s possible, I suppose… they are related chemically.

But before you go racing out to buy TT750, two things…

Contamination aside, there’s no solid evidence on which to recommend this product.

If you experiment, you are doing so on the basis of advertising hype and unsubstantiated comments from unidentified people on the Internet.

Have you used TT750 or a similar product? Let us know what it did for you in the comments!