Tribulus (or, as its sometimes called – Puncture Vine, Devil’s Weed or Tribulus terrestris) has been marketed for ages for two primary reasons…

As a natural “booster” of testosterone and athetic performance.

As a “libido” booster a male enhancement product, and a natural cure for E.D. (erectile dysfunction).

A Little about Tribulus… 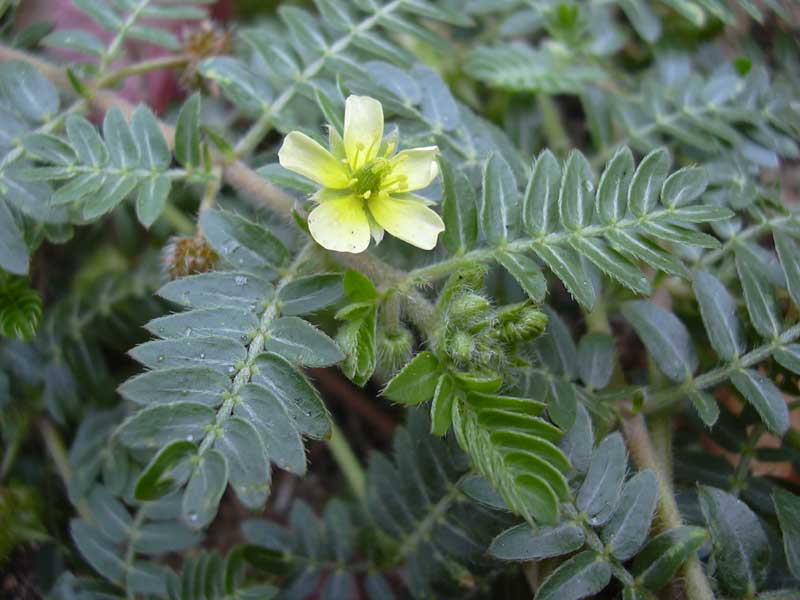 A flowering plant, tribulus contains some very interesting steroid like substances called saponins, one of which is called protodioscin.

Protodioscin is a chemical “cousin” of DHEA, a steroid hormone produced by the adrenal glands, and incidentally, the only “hormone” not effected by the U.S. prohormone ban of 2005.

Although some supplement retailers are still selling DHEA-based supplements and trumpeting its anabolic characteristics, it is a long established fact that DHEA…

How does tribulus “work”?

Well, if you believe the retailers, it works by stimulating the production of luteinizing hormone in the pituitary gland, thus encouraging the body to crank up its own testosterone producing process.

I remember when I was first introduced to tribulus back in the early 90’s. It was a pretty hyped product at the time — especially the Tribestan brand of tribulus, which had a clinical study backing up its claims (although the study itself doesn’t really discuss “test” levels in any detail – it’s more concerned with sperm mobilzation).

And of course, there were the stories of the Bulgarian weight lifters who were apparently trouncing their competition, all thanks to tribulus and of course, Tribestan.

But is this supplement really all that effective at boosting test levels? What do the most recent scientific studies say about this?

Despite the Bulgarian studies, I was unable to find any positive evidence in published Western journals. That’s not surprising really, since old “Eastern Bloc” data is notoriously unreliable.

The data I did find was much less promising, and a bit troubling, to say the least.

“Supplementation with tribulus does not enhance body composition or exercise performance in resistance-trained males.”

“The findings in the current study anticipate that Tribulus terrestris steroid saponins possess neither direct nor indirect androgen-increasing properties.”

The most recent study I found (J Strength Cond Res. 2007 May;21(2):348-53) was conducted on Australian rugby players… none of whom received any perceptible benefit from tribulus supplementation.

Of course, you won’t find these most recent studies referenced in the sales material of the current test boosting supplements – you know the ones, talking about the “controversy” surrounding these new steroid alternatives and what not.

So why does it continue to be such a popular supplement? Why then, despite the complete lack of clinical evidence validating increased androgen production, do many tribulus users appear to be happy with the product?

I know plenty of guys who use the stuff religiously, many of whom claim to feel better—even stronger, when supplementing with tribulus.

Sometimes, the mere suggestion that you’re taking something powerful and effective is enough to elicit a response.

I have a hunch though, that this supplement’s real benefit is in boosting the libido and acting as an aphrodisiac, and it is this “benefit” that tribulus users enjoy so much. There’s pretty compelling anecdotal evidence for tribulus’ effects when it comes to getting and maintaining erections and performing better in general, sexually.

One friend tells an absolutely hilarious story about how he unwittingly took his first dose of tribulus just prior to a Mexican vacation with his girlfriend and her parents.

He spent the entire flight sitting petrified beside her father, with his lunch tray flattened over his lap to conceal his “condition.”

Such… uh… conditions—however “beneficial” they may be—aren’t necessarily evidence of increased androgen production (and the western evidence certainly does not support that argument).

Instead, it could be a result of any number of different mechanisms (witness how a drug like Viagra works, for example).

Clinical Data for Tribulus as a Natural Sexual Enhancement Product

I’ll have what he’s having.

There’s this study, conducted on a supplement called “Libilov“, which also contains l-arginine (also helpful for E.D. when dosed properly) and ginko. Since it’s a multi-ingredient product, we can’t assume that all the benefits can be attributed to tribulus. Nevertheless, it improved the sexual drive in 60% of the ED cases.

Although there is some contradictory evidence for the testosterone-boosting effects of tribulus, all the most recent published western data suggests it’s a dud for androgen production.

However, that doesn’t mean supplementation offers no benefit at all.

Worthwhile for Libido and E.D., a Dud for Athletic Performance

It’s value may lie in its ability to boost the libido / increase erections, and for that reason alone it may be worth experimenting with – especially considering the low cost and long safety record this supplement offers.

Don’t spend a ton of money on a specialty product though. Plain tribulus is cheap enough — you can buy 90 capsules for under $14 at BodyBuilding.com.

For such a small investment, it’s worth trying… especially if you have “troubles” in the libido and / or erection department.

Just don’t expect to build massive muscles on the stuff… that just isn’t going to happen!